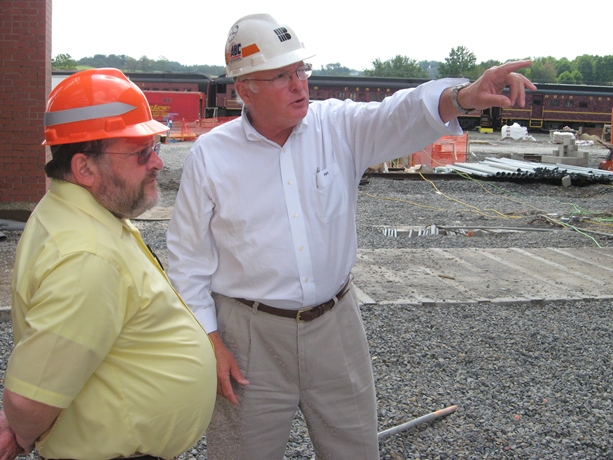 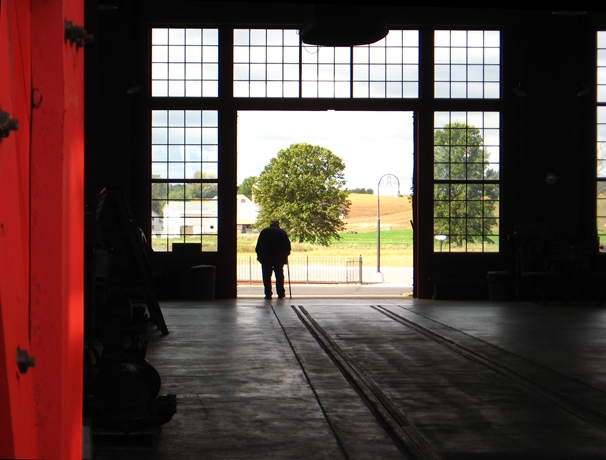 Bob Brode, the general contractor responsible for building the Age of Steam Roundhouse, passed away on January 26, 2019.

Robert Wallis Brode, was born April 18, 1948 in Coshocton, Ohio. He was a 1966 graduate of the Mercersburg Academy and attended The Ohio State University. Bob was an army veteran, and enjoyed playing golf, sport shooting with the guys, and will be remembered for his sharp wit and sense of humor. Bob took solace in visits to the family farm just outside of Newcomerstown. In addition to a daughter, two granddaughters and three sisters, he is survived by his wife of 45 years, Louise, who enjoyed volunteering her time with Bob at the Age of Steam Roundhouse.

Bob retired recently from The W. M. Brode Company in Newcomerstown where he engineered, built and repaired bridges across the United States. The company, founded by his great-grandfather in 1887, was co-owned by Bob and his cousin, George Brode. Bob was a founding director of the Pile Driving Contractors Association and was an active member of numerous professional organizations.

“Bob was a gracious, thoughtful, knowledgeable, and talented man, “ said Bill Strawn, president of the Age of Steam Roundhouse. “I first met him when he visited the Ohio Central Railroad System to help us understand various bridge issues on our railroads. As busy and successful as he was, Bob would always make time to stop in and help us with the myriad of engineering challenges that all railroads face. There is no doubt that his guidance expedited many of our projects, and Bob was highly thought of by all in the industry.” Getting to know Jerry Jacobson, CEO of the Ohio Central, “Bob was later instrumental in the successful construction of the Age of Steam Roundhouse, and remained our steadfast advisor, tour-giver, and beloved friend.”

Bob considered one of his last projects to be his greatest and most fun—building the Age of Steam Roundhouse for Jerry Jacobson in Sugarcreek. After construction was completed, Bob enjoyed giving group tours at the roundhouse and sharing the camaraderie of Age of Steam Roundhouse staff. He loved steam locomotives and shared that passion with other enthusiasts.

Bob was an integral and essential part of the Age of Steam Roundhouse project, during both its construction and during the ensuing years after construction was completed. Without Bob’s expertise, guidance and dedication, this wonderful place would not exist in its current form. Bob’s attention to details ensured everything was “just right,” culminating in a realistic shrine built for steam locomotives. Bob also continued close association with AoSRH with his daily visits to check on “his baby.”

Wanting to gather more information, Bob accompanied roundhouse tours, taking notes about the historic locomotives on display from the more experienced tour guides. He also gathered historic information from AoSRH handouts and other sources, and did his homework well. Louise prepared note cards for Bob’s evening tour guide rehearsals at home, and for his occasional referral during the Saturday roundhouse tours he began conducting. Bob certainly had fun whenever he led a tour, and it showed in his facial expressions and body language.

Bob was a man with traditional “old school” values who was much admired and whose company we greatly enjoyed. He had many friends at the Age of Steam Roundhouse and his presence will be missed by all.