United States Army locomotive No. 2630 leads a train of WWII-era military vehicles during the Steam to Victory event.

On July 5 and 6, 2019, the Age of Steam Roundhouse hosted Steam to Victory, an event to commemorate the 75th Anniversary of the D-Day Landings and to celebrate the role that railroads played in the war effort.  This unique event brought together WWII reenactors, historic military vehicles, and the Roundhouse’s own collection of WWII-era trains.

The “star” of the railroad exhibits was US Army 2-8-0 locomotive No. 2630, which was unveiled at the event after an in-depth cosmetic restoration.  Resplendent in Army Olive Drab paint, No. 2630 was featured leading two restored Army flatcars and a Wheeling and Lake Erie Railroad caboose.  Atop the flatcars, military vehicles were displayed including an M3 half-track, M8 Greyhound armored car, a Jeep, and a unique “Weasel” tracked vehicle.  This unique exhibit represented a World War II train moving important equipment off to battle.

Around the Age of Steam grounds, numerous military displays welcomed guests with immersive experiences.  Visitors learned about the living conditions of soldiers on the front lines from reenactors of both the Allies and Axis forces.  Vehicle rides and small arms demonstrations gave guests a taste of how this impressive equipment was used in war.  Twice a day, the reenactors marched off for a simulated skirmish where US troops stormed a German bunker.  The Ohio Amish countryside surrounding the Roundhouse were a good stand-in for the similar fields and hills of Western Europe.

Other components of the Age of Steam railroad collection were also on-hand for guests to view.  Grand Trunk Western 4-8-4 #6325 led two restored Chicago, Burlington and Quincy Railroad passenger coaches, simulating one of the thousands of troop trains which shuttled soldiers around the US.  One of the most colorful exhibits was a steam locomotive tender made up to represent the red, white and blue “Buy War Bonds” tenders created by the Nickel Plate Road as a means of advertisement to help in the war effort.  Another tender sported the insignia of the Army’s 82nd Airborne Division, which Age of Steam Roundhouse founder Jerry Jacobson served in.  Finally, 0-6-0T tank engine #4 proudly displayed its heritage as a US Navy switching locomotive.

Age of Steam Roundhouse would like to thank the following organizations for their participation in Steam to Victory:

Despite some hot weather and a few pop-up thunderstorms, Age of Steam Roundhouse’s first large public event was well-attended and received positive feedback.  Stay tuned to the Roundhouse mailing list, website and social media channels as we work to develop more exciting events and experiences in the coming months. 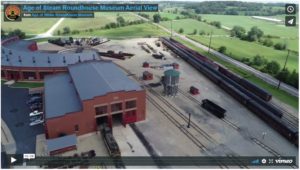